As each day goes by, the chance of a zombie apocalypse seems more imminent.  Therefore, you need guidance, and movies don’t help because those aren’t real zombies.  A real zombie will fuck you up – real quiet-like.

I have made a list of the 5 items (or skills) that are ESSENTIAL to survive.  I have left off basics such as “food”…which is obvious…because zombies eat brains, not wheat thins.  Enjoy…and prepare:

Proof of this entry is in the google search.  “Climbing zombie” yielded almost zero results.  Why?  Because zombies don’t climb anything.  Seriously, they usually just scratch the door while mumbling “braaaiiiins” or scratch at windows like a hungry cat. 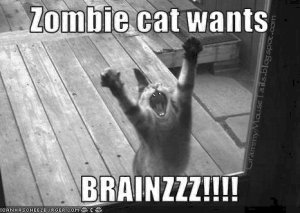 Due to years of being buried underground and well, being dead, a zombie’s muscular fortitude is nil…barely enough to walk around let alone do a pull-up.  Zombies do not climb, and this is to your advantage.

A little known fact about a zombie apocalypse that almost every movie ignores is that you’ll need sleep.  While zombies are masters at scratching doors, you never know when there might be an open window somewhere that they can fall through.  That being said, you will need to elevate yourself.

While it is imperative you don’t trap yourself  without a “plan-B” means of escape, it is important that you rest out of a zombie’s reach.  As my friend and fellow zombie killer Tony Butler explains, “You’ll need a platform to stay away from those bitches.”  I agree.

The perfect means of elevated sleep would be on top of a house, while keeping a ladder in order to make a bridge to another rooftop as a plan-B means of escape in the morning when your current house is surrounded.  Remember – zombies are very slow, and dumber than Paris Hilton’s opinions on anything N.A.S.A.

This is ideal.  Don’t forget that the reason you’re killing zombies in the first place is because you don’t want to become one.  Now I’m no expert, but in the event of a sudden zombie attack, I would assume that there is something floating around that made them that way, be it a virus, contamination, or Lindsay Lohan’s vagina running rampant around the planet.  In any case, I don’t want it.

Respirators are key for the sole reason that it is lightweight and provides an enormous amount of security for little hassle.  You have to pay attention to detail, and the one big detail is that if you are waxing zombies left and right, there’s going to be quite a bit of black blood splashing around.  From what I know about zombies, you’ll be one shortly after inhaling or somehow absorbing said blood and ickey stuff.

The respirator can fit snugly in your survival backpack when sleeping in your elevated position…after all, it is mainly used for combat, and you my friend, are one combat ready sumbitch.

On the other hand, women look good in it as well and it keeps their mouths shut when you’re shot-gunning zombies – which is handy because the last thing you want to hear while laying the smack down on the living dead is how you “never listen to me” or you’re “not killing them right”.

So that whole schpeel about blood and shit splashing around when killing zombies also applies to your eyes.  Say you run into a real dick-head zombie that spits in your face, or one of your grenades explodes in the middle of a zombie pack and a spleen hits you in the forehead.  That stuff will leak into your eyes and give you the virus…then you’ll be chowing down on brains faster than Obama can fuck the middle class.

Here’s the beauty of the goggles…say you’re sprinting from a group of zombies (they hunt in packs) and you find yourself at the end of a pier…boom – swimming goggles.  Get yourself a shaded pair to double as sunglasses while hunting during the day as well.  Not to mention above all else, they make you look like a total and complete badass.

Picture coming across another apocalyptic survivor and being covered with zombie blood while at the same time being protected by your respirator and goggles.  They’d look you up and down then tell you that you stink because “you’re the shit”, and if that other survivor is a totally hot woman (see left), you can give her the respirator and keep the badass look of the goggle zombie killer…which is nice.

The undead know no ladders

While not an actual requirement, parkour is extremely useful in zombie attacks.  Let me be forthright, you don’t need the parkour skills that you see on G4.  You should, however, be able to clear a chain link fence or skip a picnic table with minimal contact.

Look at this picture.  Look at those stupid zombies.  That’s why you need parkour.  It’s a given that you’ll run into a sticky situation or two, and the ability to leap over shit pays off tenfold.  Have you ever seen the main star of a zombie movie that was fat?  I have not, and it’s because they can’t leap.

Let’s clear the air a little bit by running a comparison so I can truly convey what I’m getting at here and cover some things zombies can’t do that you can (or at least have the ability to):

Note that 4 out of the 6 relate to parkour-esque skills and the other two are just a benefit of not being dead.

Ah yes….trusty ol’ Delila.  As we all know, there are ways to kill the different monsters that ail ya.  Dracula gets a stake in the heart, werewolf gets a silver bullet and zombies get shotguns.  However, you can’t just go around shotgunning zombies wherever you want as any COD player knows just from drunken Friday nights, no-no.  Zombies need a blast to the head preferably with buckshot although slugs are more than welcome.  Hell, you can shoot them with ding-dongs if you’d like.  As long as they’re out of Delila, you should be ok.

Here’s the theory; Zombies are pretty much dead, so shooting dead parts of them isn’t really going to work unless you re-animate them then kill them again, but fuck that.  If you shoot their face off, they can’t operate…they can’t see or smell or hear you, so even if you didn’t kill them they’d just stumble around with their arms out like a wasted ASU student drunkenly trying to find some tittes.  Shotgun 1, Zombie 0.

Take these tips and absorb them.  Zombies have already begun taking over, so its a matter of time…and don’t forget to get your girlfriend the respirator…I’m telling you,that’sa good investment regardless.

Like Loading...
‹ My Critique of Insane Internet Pictures
4 Things Made Awesomely Better By Hitting (Or Dropping) Them ›