4 Things Made Awesomely Better By Hitting (Or Dropping) Them

No, “women” aren’t on this list, so stop being retarded.

You’ve seen it a million times…you know, that “Why didn’t I think of that?!” deal…Some stumblebum will inevitably pick up and object to move it to sweep the floor and drop said object.  All of a sudden, the product either works better or is improved and the janitor is then promoted to lead designer.  This in turn produces companies that are eventually run into the ground because, well, they made a janitor CEO, but I digress…let’s talk success…here are 4 things that are badder-ass thanks to something getting hit or dropped:

I have to say I love two things about this guy:

1. I admire his persistence.  After that first stripe is fixed he beats the hell out his television consistently for over a minute.  From what I gather strictly from his dedication, he’s done this before and it has worked.  What I gather from that is that it works about as long as a boner does while simultaneously winning the lottery and getting blown by a toothless Phillipino hooker.

2. We all hit electronics when they go haywire…usually with enough force to not do anything yet gently enough to not “break it more”.  This guy’s friend told him his t.v. was fucked up and his first response was, “Where’s my bat?”

DISCLAIMER: Smacking the piss out of your television DOES NOT make it work better.  It’s on this list because there’s a reason there are barely any television fix-it shops anymore…it’s easier (and sometimes) cheaper to buy a new one, so if your troubleshooting skills work, why not? 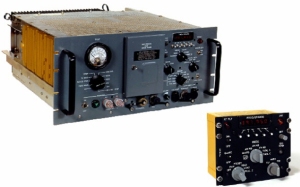 That big gray radio is the GRC-171b ground-to-air radio.  As a Marine, I “fixed” these.  Basically, I pulled out bad modules and replaced them.

Sometimes replacing crap in these wouldn’t work, so we would do a “drop” test.  Weighing in the area of 75lbs, they hit hard and shit rattled…but then they’d work…I’m not kidding – they’d work 50% of the time after you drop tested them.

What’s funnier (depending on your stress-level of National Security) is that the drop test was so reliable with these things, that we actually did it in the Iraq War when fighter jets were on standby until communication could be established (essentially saving precious time to properly fix them).

Yes, I’m here to tell you that when bombing runs were delayed by 5 minutes, it’s because the communication guys were dropping and kicking radios so that we could tell the pilots where to drop explosives.  And in case you’re wondering if drop tests are ruining the radios…they’ve been in service since 1975.  If reliability was an ugly singer that sang shit music and pissed me off, the GRC-171b would be Cher.

I can’t stand douchebags…I don’t think they serve any purpose to society other than to take all the pink shirts off the rack so that a real man’s woman doesn’t have to sift through them when buying him manly shit.  Jersey Shore is a show that explains exactly what I’m talking about…make sure you watch all the way through and note the 0:27 mark where tough guy, the “Situation” is holding his mouth in disbelief:

Up the middle…just like your mom, but with a slight delay

For those of you that aren’t “in the know”…Paul Brown invented this play about 60 years ago.  It’s the exact opposite of the play action (faking run, then pass).  It is extremely effective versus a blitzing defense with the premise being that the D-line is already committed, therefore giving more lanes for the running back to break through…now check this shit out:

One of Paul Brown’s quarterbacks was confused on a play back in the day.  He was about to get sacked, so he took out his magic wand, turned himself into a pussy, and tossed the ball to his running back so he would take the hit.  The back, shocked as shit as to why he suddenly had the ball, and eager to show up that asshole for making him the scapegoat, ran up the field for a first down…thus, we have the draw play.

Also, Paul invented the facemask and playbook, so when he started using this ludicrous play, nobody really doubted him, and it is now a staple for one-dimensional teams (Pats/Colts/Saints/Packers (as of 2012)) that love passing.

Although this is technically in use now because someone didn’t want to get hit, I’m allowing it, because poop.

Like Loading...
‹ Top 5 Items/Skills Necessary For Surviving The Zombie Apocalypse
5 Crazy And Unsolved Mysteries In The Mountains ›