Top 5 Nintendo Games That Changed My Life (and YOURS)

My brothers and I saved for months when Nintendo first came on the scene.  I was 11 years old.  We all skimmed at lunch at school and would come home then throw all of our money into styrofoam cups on the shelf.  None of us cheated, either.  After a few months, we had enough to buy a Nintendo and 1 game each.  Don’t forget, this is when arcades were the big thing and graphics were terrible, so having a home system that wasn’t Atari totally kicked ass.  What’s more is that I was in a bad neighborhood at this point in my life so video games were my savior.  Here are the top 5 that fine-tuned me as a whole: 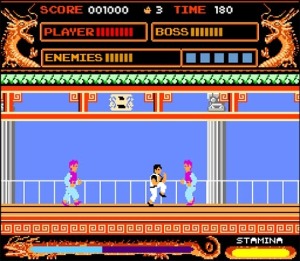 PREMISE:  You’re an Asian guy that likes to stand on one foot a lot.  Your mission is to go through 5 levels of an evil man’s temple to rescue your sweet-heart, Sylvia.  All the while you encounter henchmen, bees, midgets, a fat guy and an end boss that literally takes 20 kicks right to the chops.

REALITY: Kung Fu taught every 11-year-old  karate.  This is where I learned to punch someone in the chest and how to raise a kick to a shorter kid’s face, stopping just short of contact.  My threat of ninja skills at this age couldn’t be touched.

BADASS LEVEL: 5 – I hated this game for the first 30 days.  But after taking about a month to figure out that I had to jump to kill the midgets that tried to flip-kick me on level 2, I took to it a little more.

The replay value was terrible seeing as immediately after you rescued Sylvia, she would just get captured again…by the same guy…rinse and repeat – forever.

The other bad thing about this game was the reality.  I mean, the whole defense to jumping midgets was pretty tight but seriously, I’m in my thirties now and I haven’t been attacked by a midget in that fashion in ever. 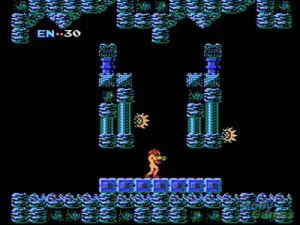 PREMISE: You’re a human trapped on an alien planet infected with all kinds of weird.  You fight through an impossible world with weapons ranging from wave and ice beams to bombs to missiles.  Your ultimate goal is to beat some jelly fish and explode the Mother Brain of the aliens (which looked like a dog’s red-rocket).

REALITY: This taught every 11 year old how to be resilient.  To this day I’ll pay money to anyone that found Ridley on their own…let alone got to that tampon-looking Mother Brain with enough missiles to kill it without one special key:The Metroid Unauthorized Game Secrets book.  That’s right, there was a book that had every room, every world and every location of hidden energy tanks, missiles and guns. Not that special you say?  Don’t forget that this was in a time where the “inter” and the “net” hadn’t had sex yet, thus making their world-changing baby.

BADASS LEVEL: 7  – Like I said, this game was incredibly hard without the book.  Not difficult as in challenging, but difficult as in you’re lost and won’t die.  Trust me, nothing is worse than coming across the same room over and over and being lost and not being able to kill yourself.  Similar to being at work.

i don’t even know what’s going on here

REALITY:  This game taught every 11 year old how to identify cheaters.  I learned early that Bo Jackson is apparently the fastest S.O.B. on the planet and Christian Okoye will never get you less than 5 yards.  Needless to say, the beginning of the game between you and friends went something like one of these:

A. – You pick your team, your friend picks their team, game ensues, Kool-aid after.

B. – You pick your team, your friend picks the Raiders, you call him names until he picks another team, Kool-aid after.

As mentioned earlier, there’s only one problem with picking the raiders:

Bullshit not-withstanding, Bo Jackson was ridiculous.  Recall earlier when I said that if you pick the corresponding defensive play, there was no hope?  Bo gave you hope.  He could literally run backwards to his own endzone then to the other 5 yard line, then back to his endzone, then across the field again to score.  In fact, if you rushed for less than 650 yards and 7 touchdowns with him per game, you sucked.

BADASS LEVEL: 7 – Tecmo Bowl was flat-out fun.  The best part was getting on the 1-yd line and going up the middle.  If the offensive player wanted to dive over the line, they hit “B” repeatedly.  Coincidentally, the D hit “B” repeatedly to stop it.  Long story short, if your buddy was slamming on his control, you do the same for the stop.  It was stupid, but entertaining…kind of like flicking peas across the table with your spoon. 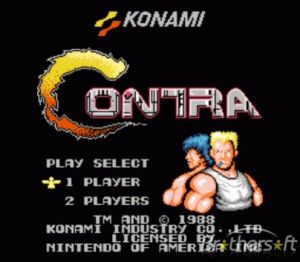 PREMISE:Contra was about one (or two) commandos that run through armies of soldiers, then aliens, then bugs, then back to soldiers.  Their weapons included lasers, machine guns and the awesome spread gun

REAL LIFE: Contra taught 11 year olds how to cheat and how to win.  It also taught you how to “accidentally” unplug your friend’s controller when he kept using all the lives.

Contra was very difficult.  Thus, this game came complete with the coveted “30-lives code” you see to the left.  To play two player, you added in “select, start” at the end and split the 30 lives between the two of you.  Even with this code enabled and even if you were the best Contra player to ever have been birthed, you still completed the game with only 1 or 2 lives left.

BADASS LEVEL :9 – Everyone over 30 remembers the pure joy of the moment when a winged “S” dropped in front of their character.  That was the spread-gun.  It hit everything on screen.  It has killed more people depression.  Ultimate Joy through life goes as such:

Adult: Getting a raise

“I’m gwonna eat your faythe off!”

PREMISE: You’re “Little Mac”, an unrealistically tiny boxer that makes his way through the ranks to meet and beat “Kid Dynamite”, Mike Tython.

REAL LIFE: This game taught 11-year-olds how beat up different races.  For instance, white people have glass jaws, Turks are huge and vulnerable when they charge, Indians disappear, Italians only uppercut and Russians are drunks.  Oh, and black people knock you out with one punch then dance.

BADASS LEVEL: 10 –I may be biased since this is my most valued NES game, but MTPO was it.  After a year of trying and figuring out patterns in the opponents, I was able to make it to Tyson without being defeated…no small feat when you include Mr. Sandman and that guy that kept talking about tanning.

01:19…that was the magic number.  Until that point, Mike would unleash uppercut after uppercut…each of which would knock you down with a single blow.  At the aforementioned time, however, he switched to jabs and crosses…at least Mac could take 2 of those before turning pink and falling to the mat.

After 5000 points, you had enough to win by decision and Tyson would make a weird face like you just asked him a math question that equaled more than 6, and Mac would be awarded the victory.

After a full year (I’m serious about that) I was able to beat all the boxers and Tyson in the same sitting, Retiring 19-0.  How fucking sweet.  I was the man at school…until this happened:  007-373-5963.  That’s the code to go directly to Iron Mike…I still remember that because when Nintendo Power came out with the code, everyone could beat him and I was no longer the man.  HOWEVER, if you put that code in and beat him, the game always retired you at 19-1…I was 19-0…so suck it, you code-enterin’-sons-a-bitches.

Like Loading...
‹ My Favorite Choke: The Okuri-Eri-Jime (Bow and Arrow to you Jiu Jitsu cats)
5 Ridiculously Insane NFL Jukes That Time Forgot ›