There’s “surviving”, then there’s “SUURVIVINNNG”.  I’ve survived many things in my life, but it tops out at the time I was 14 and had a cavity for a week.  That shit sucked.  However, I will gladly take a slap in the face and be called a pussy from any of the below mentioned.  These cats (that’s hip-talk for “peeps”) are on a whole different level than you or I.  How do I know?  Because their will to live is stronger than Lindsay Lohan’s breathalyzer at 3 a.m. And I can’t verify, but I’m pretty sure at least one has pissed napalm on cold nights just to stay warm. 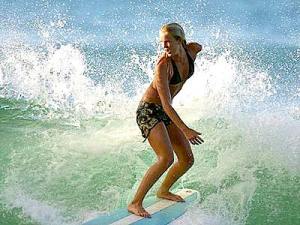 Too bad for the shark she poisoned her own arm.

You know Bethany.  If you don’t, you’re familiar with her story…no? maybe you’ve seen the movie Soul Surfer? Still no?  Well if not, I’ll let you know:  She attacked a 14-foot tiger shark on Halloween, 2003 at the age of 13.

Some people say the shark came up from under her while she was waiting for her next wave and ate her arm.  I’d like to think that she saw the shark first and decided to punch it in the stomach…from the inside…because fuck sharks.

After the tiger took her arm, it swam off.  Probably from the skunk-eye she shot at it for eating her favorite arm.  Bethany then -with the help of friends – paddled up to shore, had her friend’s dad tie a surfboard leash to her new stump as a tourniquet, then rode to the hospital and stayed there for 7 days while she recovered…probably still pretty pissed off about the nerve of the shark  to try that shit.

So, Bethany decided to go shark-hunting ONE GOD DAMN MONTH after her arm was eaten.  Some say she just went surfing again because the fight never happened.  That pussy Jaws was a no-show to round 2.  Regardless, she continued surfing…with one arm….in competitions….and won.

“Earth, next time you stop me whilst I’m falling, it’s your ass”

On January 26th, 1972, JAT flight 367 decided it wanted to get all explodey.  Being a plane that follows its emotions, it did so.  The airplane tried to blow up Vesna as well and she wasn’t having it.

Ironically, Vesna wasn’t even supposed to be on the flight.  Her flight got mixed up with another stewardess, named of course, Vesna.  Call it fate or whatever you’d like, but something twilight zone-ish was going on.  Well, in mid-flight, a bomb was determined to have gone off which tore the plane in half.  Vesna disliked bombs, so in order to piss it off, she didn’t die, fell 33,330 feet (YES) and then didn’t die again.

She was alive, but totally fucked up (fractured skull, 2 broken vertebrae, 1 crushed vertebrae, temporary paralysis, two broken legs and a 27-day coma), and understandably so.  When the bomb blew up, she got pinned inside one of the blown-up parts of the plane by the service cart, so she fell inside a big chunk of plane that slowed her decent, but not by much.

Here’s the math…I’m no genius, so don’t get all Andrew Einstein on me, but I figure she was falling at the very least, 80 mph (yes, I know, terminal velocity, mass…whatever, just enjoy the article)…you know, with a giant chunk of plane strapped to her back.  That’s going 80 mph for 33,330 ft (6.31 miles).  That’s 1.33 miles per minute.  That’s 4.74 minutes of falling.  She fell for almost five Goddam minutes.  FIVE minutes.  Here’s a list of things you’ve probably done that took less time than her fall:

Yes, from the second you read “Nuclearchainsaw” until now, she’s been falling.

“This is the one that REALLY pissed me off”

The Mexican Revolution started in 1910.  Wenseslao Moguel started earlier than that…unfortunately I can’t find a birthdate for him, so we’ll just say that something spontaneously exploded one day, and after the carnage Wenseslao was standing there, naked, with a gun…and lightening around him.  Kind of like when terminators come back from the future.  So technically, he probably hasn’t even been born yet.

Wenseslao was a soldier during the Mexican Revolution and was captured March 18, 1915.  After a quick trial (and by “quick” I mean, “non-existent”), he was sentenced to death by firing squad.  Being berthed by nuclear explosion, Wenseslao found this insulting, so he just stood there…letting them do their thing…while he entered his own personal invincibility code into the matrix.

Unfortunately their “thing” was to aim from about 30 feet away at Wenseslao’s chest and fire.  He was hit 9 times and fell to the ground.  An officer came up to the limp Wenseslao and at point-blank range, put a bullet in his face to insure his death, as was apparently the practice back then.   The executioners then went off to lunch.

Once they left, Wenseslao crawled away – I shit you not.  He crawled away, got himself found and survived.  That picture over there is Wenseslao on Ripley’s Believe It Or Not in 1937 with none other than Mr. Ripley himself…and check out Ripley’s face…I mean, his show is BASED on seeing shit that you should either believe, or…well, not.  You know you’re a badass when Ripley is looking at you not believing what he’s seeing.  I mean, that’s like ………………I don’t know what that’s like.  It’s just awesome. 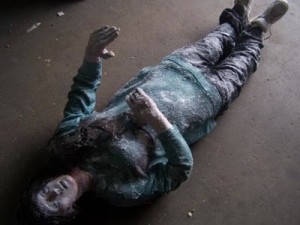 Not far from her neighbor’s house, she decided to button-up and hoof it over to see about getting a tow.  One full morning-time later, her neighbor opens his back door to find a Jean-flavored otter-pop stuck in the snow near his porch.

Jean was rushed to the hospital with a heartbeat (yes, she wasn’t dead) that was so miniscule its only seen on really crappy television shows.  To quote Dr. David Kelly: “She was severely frostbitten.  None of her limbs would bend or move” That means her limbs were black and ice crystals formed in her cells…i.e., amputation is usually the only choice here.

Long story short, her family and friends got some churches to pray and she thawed out with NO BRAIN DAMAGE and NO LIMBS NEEDING AMPUTATION.  Jean’s sister even said that every time they lifted the sheets they could “see the black going away”.  Yep, she was basically coming back from the dead.  She was un-zombied.  Trip out on that.

Steven Callahan is absolutely ridiculous.  He also has a degree in Philosophy and was a naval architect.  This came in handy when he was stranded for 76 days in a little boat similar to this one.

In 1981, Steve took his 6.5 meter boat, Napolean Solo  for a ride.  It supposedly hit a whale and sunk.  This would not have happened had he named it Han Solo…but I digress. Steve lived off of a basic rescue kit, 2 solar stills for collecting about a litre of water per day, and a spear-gun that supplied his Mahi-Mahi fish diet.

During this 2 months and 2 weeks float on a 6×6 foot raft, he encountered sharks, holes in the boat which he repaired, collected water, watched 9 boats pass by without noticing him and invented many, many cuss words that we still use today.  An interesting fact about Steve is that with his water collection and fish hunting skills, birds started following his raft, creating its own ecosystem.  So, 76 days and 1,800 nautical miles later, some fishermen noticed a bunch of birds flying over an orange thing in the ocean…that orange thing was a Steve Callahan weighing about 1/3 of his normal weight…but alive, and with a wicked six-pack.  Essentially he was rescued because he made his own ecosystem…tell me you’ve ever heard of anything like that.  You haven’t.  Even if you have, you still haven’t.

Here’s the kicker; after all that time and sunburnin’ , saltwater soreness, and fishing and pooping out his own guts, he was taken to a hospital the morning of his rescue.  He promptly thanked everyone and left that same afternoon.  Why is Steve #1?  Because he lived in a 6 foot raft for more than 2 months, sometimes surrounded by sharks.  Even that shitty magician David Blaine has nothing on that.  Oh, and he didn’t have Wilson either.

Like Loading...
‹ I Know Everything About You (The 5 Handshakes That Give It Away)
My Favorite Choke: The Okuri-Eri-Jime (Bow and Arrow to you Jiu Jitsu cats) ›