Some Random Jiu Jitsu Tips For Your Game

Jiu Jitsu borders steak and tits on my list of things that I think are awesome.  I’ve come to the reality that black belts won’t give away secrets that they’ve spent years discovering from thousands of hours of rolling.  They want you to pay your dues as well and rightfully so.

Professor Hermosillo’s ear is about to rot off from my constant griping about wanting to know more.  He eventually broke and started showing me little tips to make my game better as a purple belt.  Those tips aren’t at all what I expected to learn, but I’m diggin’ them.  Those tips I’m keeping to myself for now, but here are some that I’ve learned that maybe a beginner to intermediate grappler can find useful.  If you don’t, well, go on to the next article, it’s awesome.

Yes, choke that bastard first.  Here’s an example; you’re in the mount, the guy’s (or gal’s) arms are in tight.  Well….watch:

Choke that dude.  Once someone gets a hand in their collar, they know what is coming and it’s not a massage.  Hands in collars equal movement to get away from the choke.  Movement equals opportunities for mistakes and mistakes equal arms getting locked and shoulders getting secured which in turn equals taps.  In short, going for chokes chains into taps.

This pretty much spells it out for you.  You sitting still means the other guy has the opportunity to advance or attack.  I had problems with this as a white belt because of my stamina.  Any moment of rest was welcome in my world.  However, higher belts would move ever so slightly while resting at the same time…they were advancing.

Let me clear something up here.  You don’t have to actively attack or defend.  You have to give the illusion of attacking.  An example would be where you’re on the bottom in side control and you’re exhausted.  Get on your side  and poke around the opponent’s knees or play with his/her gi a little bit.  It gives the illusion that you’re up to something and forces them to play caution a little bit…maybe enough for you to bridge out.  Will you submit them?  Probably not by just messing around, but it may create opportunity and the energy expended for their movement is extremely beneficial.  As they say in Judo, “Maximum efficiency with minimal effort.”

It’s basic.  After 5 years and some change it is still one of my biggest issues.  I focus on my hips and one other thing every single time I roll. Something that I’ve noticed (and this may be different for you), is that 80-90% of the time when I’m trying a position or technique, my hips are incorrect.  Don’t get me wrong, I’m not a totally slopped-out BJJ player by any means, but I’ve noticed that when my instructor gives me tips on whatever I’m drilling, I hear “hips, your HIPS!” more than anything else.

Armbars not tight?  Hips.  Choke not locked in?  Hips.  Kesa Gatame not as effective as it should be?  Hips.  Hula hoop falling down? Move the hips.

Nearly everything in jiu jitsu is dependent on your hips.  So if something doesn’t feel right, tight or effective, check those hips first.

Yea, little confusing on this one so let me break it down a little bit.  Firstly, this is a mindset – not a physical trait.  Sounds like bs I know, but think about the definitions:

Winning – Defeating an opponent in a contest

Unbeatable – Unable to be defeated

Get it yet?  Basically its saying that if you’re unbeatable, you’ll never lose.  You don’t have to win, you just won’t lose.

In the NFL this won’t fly, you have to try to win in the NFL.  Jiu Jitsu is different.  In jiu jitsu you adjust positions and go with the flow until something presents itself – position before submission as they say.  In other words, going out to win may have you looking for submissions and making mistakes.  Going out to be unbeaten will put you in the mindset of escaping and gaining position and when the opportunity arises, take advantage and finish them…let them beat themselves. 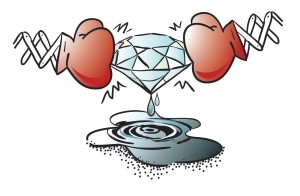 Pressure is by far the number 1 thing that will improve your game.  You know that feeling you get when you roll with black belts where you just can’t move?  It’s pressure.  Have you ever tapped from a vicious knee-on-belly or just from your chest being compressed?  Yep, that’s this little guy – pressure.

The importance of pressure never really occurred to me until about my third year and it was amazing.  I had a mental block from blue to purple on how to combo techniques.  I’ve read many, many articles online saying purple belts are able to run 2-4 move combinations.  I read that they were able to use so much less effort because they can make you move where they want to.  Pressure and experience is how they do it.

Everyone has a go-to move.  As you progress, you have a go-to combination.  As you progress yet more (which I haven’t yet, so I’m guessing here), you have a go-to anything.  Regardless, pressure is by far the most important in my personal game thus far.  In order to keep pressure, you must have good technique.  If you’re having trouble keeping pressure, focus on the technique.  They go hand in hand with each other.

Pressure opens a whole new wing of jiu jitsu – at least it did for me.  I no longer just pass a guard to side control, mount and choke.  I like to sit on the floating rib and see where the opponent moves.  Next time I roll I’ll put the same pressure on and attack where they’re going to move.  Next thing you know, you’re throwing combinations and thinking 3 moves ahead because you know what’s going to happen.  You’re making them move where you want them to, and it’s the sexiest shit on the planet.