How To Beat A Stronger Opponent

Everyone has heard that Jiu Jitsu is the art the levels the playing field between big and small people.  If you’re into BJJ, you’ve also heard an argument that’s something like, “Well, if you both know jiu jitsu, the advantage goes back to the big guy, right?”…not necessarily.

I walk around at just about 200 lbs and am 6’2″.  There’s another guy at Hidden Valley that is roughly 5’11” and the same weight.  We are in no way near each other in strength.  This guy is a bull, I’m more of speed-yak.  In fact…neither one of us is good enough for me to make my point, so let me do it with someone you may know…

“My name in Marcelo Garcia, prepare to die”

This little homerun hitter is Marcelo Garcia.  His open guard and control are absolutely insane.  He is roughly 5’8″ and competes around 170 lbs.

According to wikipedia, Marcelo’s championship record is 74 wins 11 losses.  In case that isn’t impressive enough, his losses are to people like Robert Drysdale, Roger Gracie (who is both taller and heavier than me), “Xande” Ribeiro and…well…one of the hugest dudes that I’ve ever seen compete at 170 lbs, but we’ll get to that guy in a second.

Along with notables like Masters Rickson Gracie, Sylvio Behring, and Pedro Sauer, Marcelo is one of these newfangled “technique” guys.  You know the kind – you always blame their legs for keeping you in their guard, or trying to pin them is like nailing a bowl of jello to sheet rock – he’s one of those.

Now about that other guy…he is a man who looks like someone spray-painted the Incredible Hulk and told him that in order to survive you have to do 10,000 pushups and sit-ups a day and there will be a test.  His name is Pablo Popovitch, and this is him: 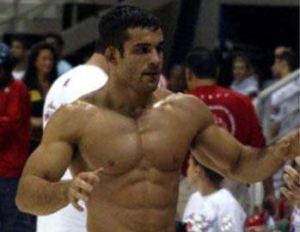 That’s Marcelo Garcia beating Popovitch with a North-South choke.  Unreal huh?  My point of this whole thing is that it doesn’t matter if you’re both black, blue, purple, white, green or clear belts (that last one isn’t real by the way), it’s who has the better technique, the quicker mind, the…”quan” to quote Jerry McGuire.

Don’t get me wrong, Popovitch is world-class and has beaten Garcia, but he didn’t this time.  Garcia had control almost the entire match.  He set traps and took his time. Of course people get lucky in Brazilian jiu jitsu, but this is far from lucky.  This is control.  This is what my teacher’s teacher, Master Sylvio Behring preaches.  You can take your time if you do it right.

Don’t be afraid when someone who looks like Popovitch is standing 3 feet in front of you waiting for the “go” call.  You have to think that you can destroy them…you have to believe that you will destroy them.  Confidence in your technique will almost alway prevail.  This is why you must roll and roll and roll.

When it comes time to competition, you don’t want to have to think that pinching your legs around an opponent’s thighs during a guard pass will keep them still, you have to know it and you have to trust it.  This is muscle memory.  Reaction, position and planning is tenfold better than getting a position and trying to perfect it during competition.  When you react quickly with muscle memory, you will be in the perfect position if you practiced it correctly.  This is why you roll, not to win, but to get perfect so when the time comes, you are perfect.

Like Loading...
‹ The Difference Between Blue Belt And Purple In Brazilian Jiu Jitsu
Top Hand Tricks That Everyone Learned As a Kid ›

Categories: EVERYTHING (in no particular order), Humor, Jiu Jitsu and Judo