Welcome to NUCLEARCHAINSAW.COM!  This is a place to read funny, sad, true and amazing things.  SOME OF THIS STUFF MAY BE OFFENSIVE.  So either read on for a little about me, or click away and enjoy – Might I suggest the “Categories” list on the right…start off with a little humor, maybe random “Top-5” lists, or go ahead and enjoy everything all at once…like a hooker with a sausage – enjoy.

I’m a guy that likes action.

Check that, I need action.  I boxed when I was 16 just because I couldn’t stand not getting hit in the face.  Needless to say, I was a poor boxer.

I joined the Marines shortly after marrying my first wife.  Unfortunately (rather, fortunately), she liked my platoon more than I did, so that was that…one thing she told me before she left was that “You’ll never go anywhere in life and will work in a gas station until you die.”  That alone drives me to this day.

2 wars and a few tours later I became a dad to the little spider-man you see below…love him to pieces – we wrestle and do jiu-jitsu and judo.  I’m trying to raise him to be the nice guy with manners that will douse out a bully when the need arises, this will make him favorable with the ladies and not a douchebag.  Am I a good dad?  I’m outstanding.

I sometimes think about what it would be like to be trapped on a desert island, then I think about 3 items that I would take with me.   My items include a wrestling mat, a pretty girl and a gerber. If you’re wondering who I would wrestle on the mat, it would be the sharks that I catch with my gerber.

I’m a man, baby, and I don’t mean the new age “metrosexual”.  No way.  I grow my beard when its cold and only shave it when it starts mingling with my nose hair.  If you put tweezers anywhere near my eyebrows, I’d kick your ass.  If you were bigger than me, I’d at least try to kick your ass.

I have a concert shirt from 2001, drink schlitz malt liquor because it makes me uncomfortable and yell at people when they expect others to do their job.  I swim within 20 minutes of eating because I hate cramps but love fighting them and between May and September every year, dinner is done on the bbq.  Between October and April I eat out.

My passion (that usually demolishes most other loves in my life) is Brazilian Jiu Jitsu and Kodokan Judo.  There are few things on this planet that are more satisfying than making someone else quit because you’ve imposed your will upon them, and I live for that.  My hero is General George Patton.  He literally slapped a soldier for being a pussy, and there needs to be more of that in my opinion. 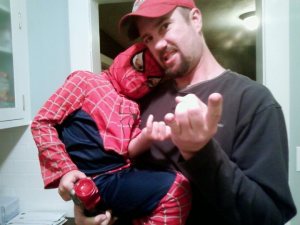